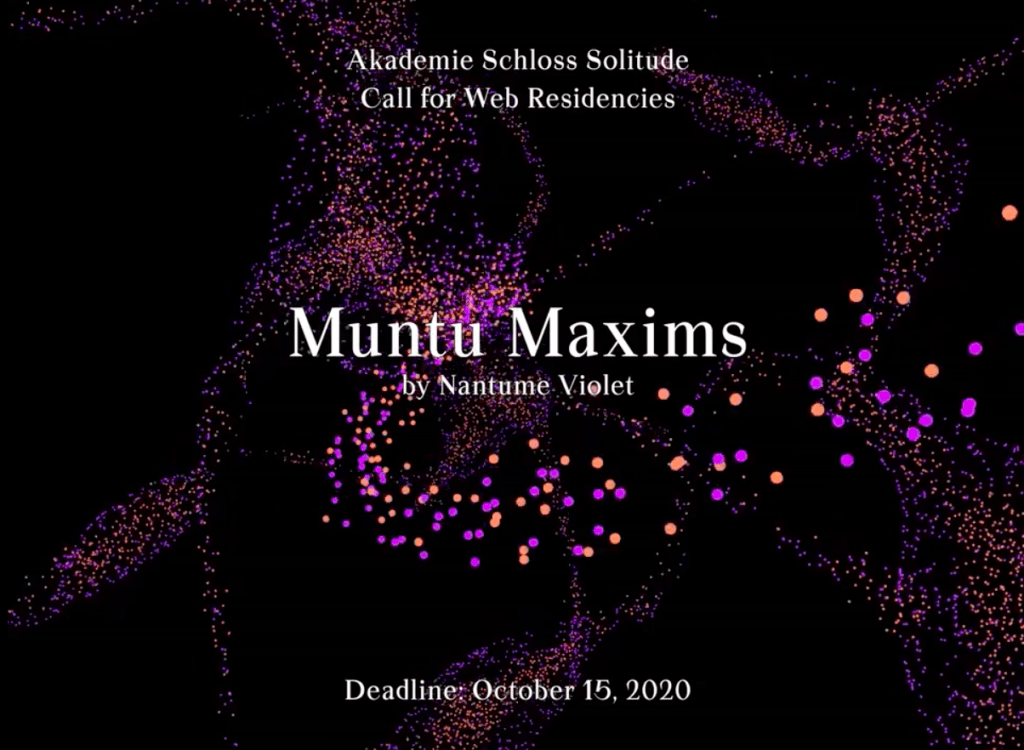 Akademie Schloss Solitude and Violet Nantume invite artists, collectives, experts, and activists from all disciplines to dedicate themselves to an experimental publishing practice through a Web Residency. With this call, they intend to bring together different areas of spirituality from cultures all over the world and to highlight selected examples online. The project seeks to reflect on the socio-psychological position with regard to facts or states of affairs that indicate Muntu’s dependence on other dynamisms in things, people, and the supernatural.

The immanence of spiritual beings that permeate daily life is expressed as continuous awareness and submissions through greetings, salutations, proverbs, verbal invocations, names, songs, religious rituals and ceremonies, myths, folk tales, and fables. These often feature animals, legendary creatures, plants, inanimate objects, or forces of nature to convey fundamental principles contingent to a philosophy. Artists will conceive imagery that venerates other things central to life’s existence; consecrated forms that express ideas and foundations of diverse systems of thought. And how these dynamisms can be manifested in creating ideas using the digital to access and start to imagine other, different common and spiritual existences – in monumental acknowledgment of other realms of the divine from cultures around the world.

»A maxim is a simple and memorable guide for a living – understood as a subjective principle of action.«

Our present dynamic creates room for varied images of thinking that explore different common existences. Images that venerate the idea of things being central to the existence of life; consecrated forms that express different concepts and foundations of thought and societal values.

Since time immemorial, and more specifically after the third Industrial Revolution, mobility as a notion has become an important resource that facilitates today’s Information Age – of bodies, ideas, information, and influence. Being able to move and the freedom to do so has intensified cultural and political activities toward dissolving or abandoning the solid ground of defined categories (as often excluded the majority of cognitive schemas and imposed an ideal scale). Premised on the accelerated movement between places, this calls the mobile person to be a »translation-human,« that is, someone who is »translatable« across cultures in a way in which people (groups or individuals) and cultures are transformed by changing their own places in society (Young, 2003). This innately accentuates the desire to stay connected and has put continuous pressure on the idea of boundaries.

Philosophies from new and old communities offer us new parameters for fresh grounds of engagement and subsequently suggest fresh ways of »relating to« things and one another. Take for example the Baganda Ntu’ology, in which a significant element of Muntu1 (person) is »being in relation to« (Kasozi, 2011). Kasozi Mutaawe urges that Muntu is conceived as a being that is interwoven in a network of relations – whose role is not to be the pivot but a partaker, with duties to maintain ontological harmony of the various realms of the universe. The »live person« or Muntu-mulamu, in their wholeness, is gauged by their constant cultivation and maintenance of a good sense of belonging to the complex multitude. This proposes fundamentals of society in which thinking is from a position of the majority (non-human included, could also be nonwestern) rather than minority (human, and could also be western). Systems led with majority thinking harbor possibilities for redistributing power, as it is ever on shifting planes and in switching positions.

»We invite artists, dancers, musicians, technologists, and audio makers to explore notions of transcendence, omniscience, and eternity to express the content of spiritual concepts in form and visual matter. How can the digital be used to denote spiritual interactions?«

Due to a progressive globalized world configuration, people are becoming more relevant as »infrastructure« and it has become imperative to also consider Muntu thinking as a center – expounding on the idea of times and spaces in which man does not occupy a unique place, except that of a mere collaborator; where a Muntu’s not being in relation to other things is equivalent to not being. Muntu ceases to exist if he or she is out of relation to other Ntu’s2 (beings) namely; Bantu and Bintu (people and things). I imagine this residency as one that will draw questions from works related to the power of transmultiplicity, and to present perceptions/maxims of life reflected in the spiritual interaction of people.

Format
They accept text, performance, documentary video and fiction, 3D objects, net sculptures and installations, web archives, apps, and any other experimental mediums. Selected projects should be carried out in open-source formats that are well-documented, shareable, and consider the accessibility of its users, who may range in age, race, gender, economic class, and ability.

Grant
For each call, the curator selects four project proposals, whose creators are rewarded with a four-week residency and 750 Euro. All selected Web Residents are nominated for the production prize HASH by Solitude & ZKM which will be awarded in 2022.

Juror
Violet Nantume is a curator and director at UNDERGROUND, a gallery and contemporary art space in Kampala, Uganda. She has worked as a cultural producer for eight years and has had collaborations in Eastern Africa, Ghana, South Africa, and Germany.

She has curated exhibitions including Close at the Johannesburg Art Gallery, South Africa, and Indulgence at Goethe-Institut in Nairobi (both 2018); Being Her(e), Luanda (2017); Zikunta: Gale of Human, a solo show by Wasswa August Donald (2016); and Heart of Darkness; a solo show by Christian Tundula, Cast a Light on Prejudice; a photography solo by Papa Shabani, and Together We Can, an installation by Hellen Nabukenya at UNDER GROUND (2015). She curated Eroticism and Intimacy: Faces, Places and Paths in Kampala and at the 2016 FNB Art Joburg art fair in Johannesburg, South Africa. Nantume organized the first-ever major art auction in Uganda in 2015. She chaired the curatorial committee of the Kampala Contemporary Art Festival in 2014.

She is currently working on a group exhibition That Those Beings Be Not Being at alpha nova & Galerie Futura in Berlin. The exhibition explores relation as »knowledge in motion«; a form of errant knowledge, with the capacity to birth new and unexpected forms, abandoning the solid grounds of defined categories, such as the Nation, the Self, and the other. The exhibitions engages artists from Ghana and Uganda. Violet Natume is a lead researcher for an exhibition project Nnaggenda 2020 with Uganda’s living modern artist Prof. Nnaggenda X. Francis. The research takes off in Kampala, Nairobi, and Munich; three pivotal places Prof. Nnaggenda studied and practiced. The project is curated with Dr. Lydia Ouma Radoli (Kenya) and Julia Gyemant (Germany). Nantume received a KAAD scholarship in 2017. In 2019 she earned an M.F.A. from HFBK Hamburg, in 2019, the same year she won a DAAD Prize for exceptional achievement by non-German students.
Nantume was born in Masaka. She lives and works in Kampala, Uganda.

Submit your project proposal in the form of:

Please write to digitalsolitude@akademie-solitude.de if you have any questions