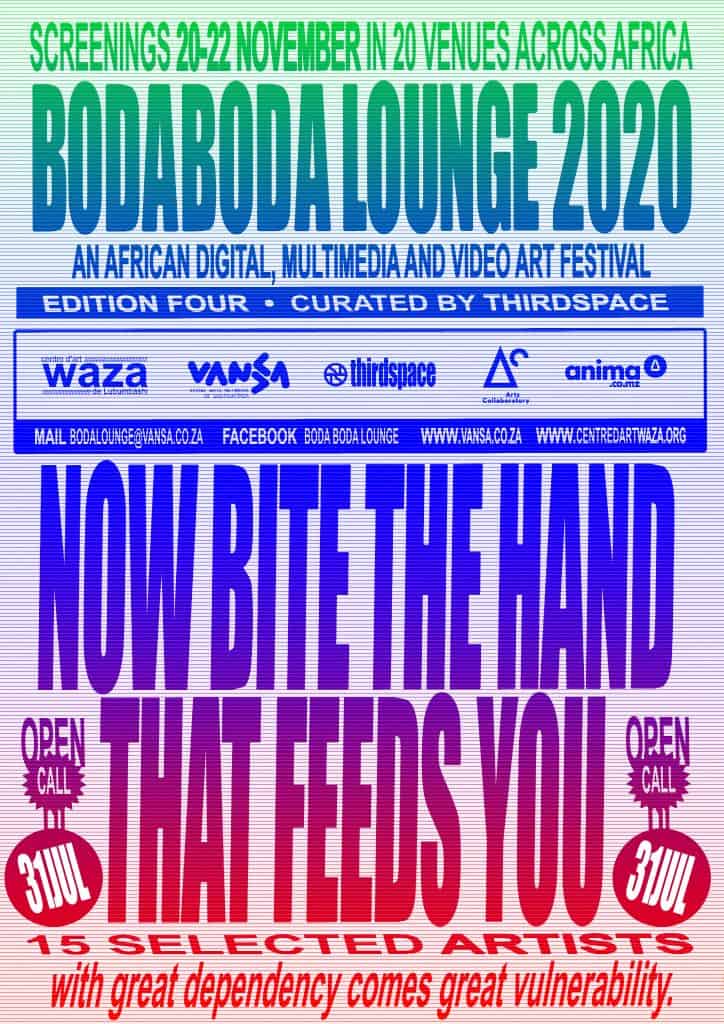 Boda Boda Lounge is currently accepting video art submissions from artists based in Africa and of African descent. Boda Boda Lounge is a cross-continental video art festival that takes place simultaneously at over 15 spaces across the African continent every two years. The 4th edition will take place from 20-11-2020 till 22-11-2020. Selected submissions will be put forward for intracontinental screening and exhibition programming.

The Boda Boda Lounge festival is based on the conviction that video art can create meaningful exchanges between different contexts in Africa that allow both the transcending of physical boundaries and the creation of an intimate atmosphere for introspection and contemplation.

Emerging from this conviction arrives the theme for this year “, now bite the hand that feeds you’’ inviting submissions that fit within or respond to this theme in productive ways.

This edition’s theme: “,now bite the hand that feeds you”

Somewhere in the so-called global north, someone purchases and accumulates commodity goods. These same goods, such as clothing and food, are then thrown away and exported to a third-world country in what is usually called an act of charity, feeding a system of intermediaries who profit from it. Whilst someone else in the global-south side of the world sells the same used clothing on a sidewalk, instead of producing such items locally. And so there are various implications out of this circulation.

In “development” communication the image of the impoverished and miserable youngster often superimposed, comes the image of a caring woman, reminiscent of another version of the feeling of mercifulness. This idea of a vulnerable and helpless child embodies the true corporate identity of the global (humanitarian) r/aid agency. A world where aid becomes trade and calcified narratives enhance the hierarchical gap between hemispheres.

It might be the time to question this image of the helping hand, amputating along with it this covert system of reliance. Contrary to the popular maxim, one “better bite the hand that feeds us.” Artists are invited to seek expression in the dialogue that visual communication establishes with this dependency system, enacting a passive form of protest through creativity as a vehicle for liberation and calling to the fact that your own hands are the real hands that feed you: in other words, self- sufficiency prevailing over dependency.

In this proposed world, intuition and resourcefulness are core values in the strive for reframing narratives and reinventing humankind. Here, non-formality comes to represent a sort of surrender — within creative production — as a means of liberation, clearly opposing (or complementing) more formulaic and controlled frameworks and establishing a harsh contrast to the agenda of modernity and the colonial project.

“, now bite the hand that feeds you”, is a curatorial proposal conceived by thirdspace, composed of artists João Roxo (Maputo) and Russel Hlongwane (Durban). This duo was invited by Waza Art Center and Visual Art Network South Africa (VANSA) to curate with them this edition of Boda Boda Lounge.

The term Boda Boda is an adaptation of the word border and alludes to a cross-border movement, suggesting physical mobility and movement across lines that universally represent the division of land and space. More literally, the Boda Boda is a motorbile, key form of transport across many African cities, it serves as a purpose-built vehicle to quickly and easily move goods and people between places. We refer to this festival as a purpose-built vehicle to mobilise video-art across destinations between artist and viewer.

Boda Boda Lounge is a project, which aims to diffuse video art across the continent. It was initiated by the Visual Arts Network of South Africa (Johannesburg, South Africa) and Centre d’art Waza (Lubumbashi, DRC) in 2014. Boda Boda Lounge intends to enable wide access for African artists to be part of the festival and at the same time working with a range of African arts organisations. It is an engagement with low-cost, widely accessible exchange processes on the African Continent. , now bite the hand that feeds you will be the 4th edition of the project.

thirdspace is a collaborative effort between Joao Roxo (Maputo) and Russel Hlongwane (Durban). The outfit is interested in the ‘’speculative imagination’’ as it applies to the various fields of design, theory, visual cultures, writing, media and associated practices, with a focus on Africa and its diaspora.

Currently, thirdspace has been revolving around the question of global (inter)dependency and the role that ”the speculative” serves as a critical dimension for imagining and producing liberating perspectives for the continent and the ”global-south”. The outcomes of these investigations take the forms of print, design, essays and exhibition-making.

João Roxo is a designer and visual strategist. Co-founder and creative catalyst at Anima, the first local collective focusing on communication for the Arts, Culture and Social Development at large, João is interested in exploring new and sustainable education models within and around the design practice, founded on creative self-reliance. Through his visual work, João explores multiple mediums and formats, from research projects to printed matter to audiovisual immersive projects. He currently lives and works in Maputo.

Russel Hlongwane is a cultural producer and creative industries consultant based in Durban. His work obsesses over tensions in Heritage/ Modernity and Culture/ Tradition as it applies to black life. His said practice includes cultural research, creative producing, design and curatorship. He is part of a number of working groups spread across the SADC region, the continent and internationally. He has shown work in Munich, Marrakech, Maputo, Karlsruhe, Harare, Bristol, Tokyo as throughout South Africa.

About The Event Organizers

Waza Art Center was founded in 2010. As a resource for the art community, it is strongly engaged with the social reality of its environment and initiates experimental projects that allow artists and cultural producers to carry their voice on the international scene.

Visual Arts Network of South Africa (VANSA) operates as a development agency for the visual arts in South Africa, promoting connection, access and innovation in our industry. It was initiated from the need to address historical imbalances in access to opportunities in the visual arts and to attract more public investment and funding for the sector.