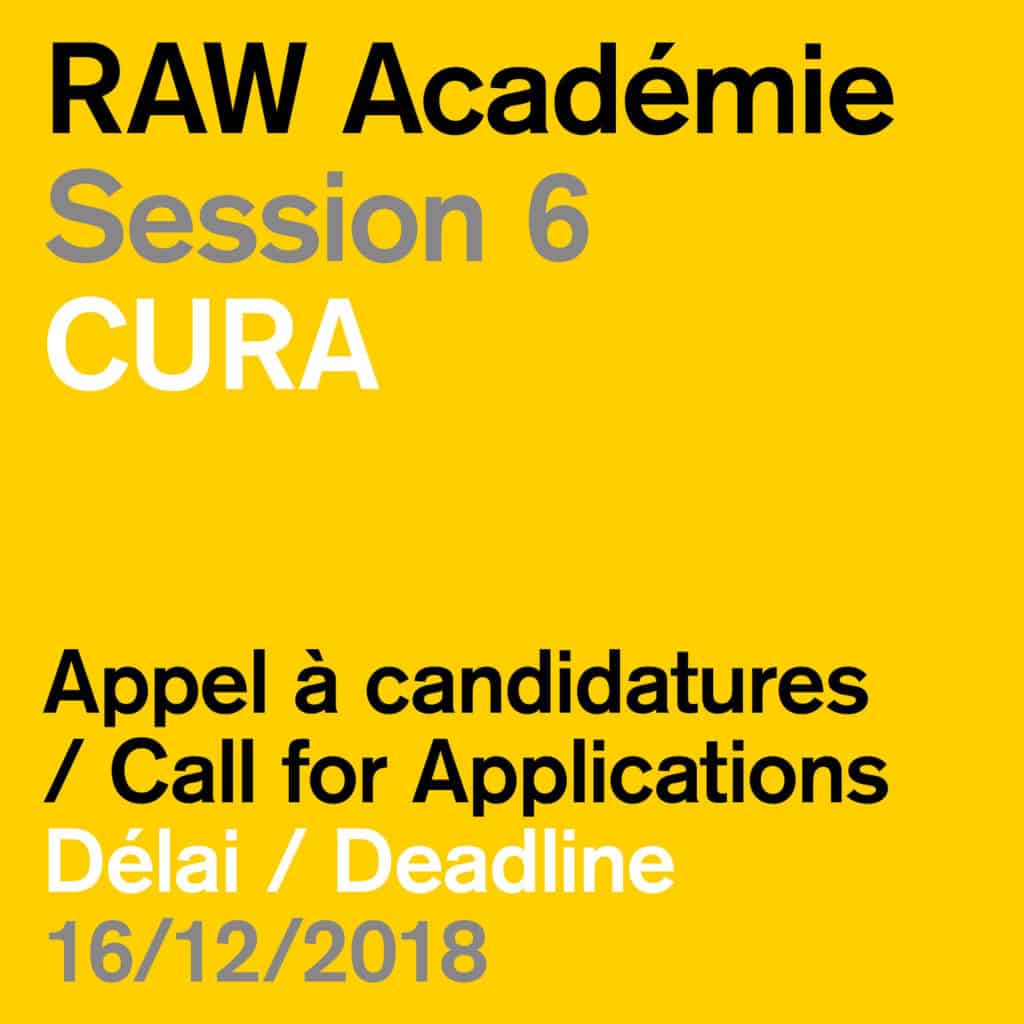 What is RAW Académie?

RAW Académie is an experimental residential programme for the research and study of artistic and curatorial practice and thought. The programme takes place over 8 weeks in Dakar. It is dedicated to a dynamic reflection on artistic research, curatorial practice and critical writing. The Académie is held during two distinct sessions per year; March–May and October–December. Session 6 will be led by RAW Material Company’s Founding Artistic Director Koyo Kouoh and will take place from March 18 to May 10 2019 in Dakar.

What the task of a curator is or has become is not a relevant question or debate anymore. The starting point of our reflection is rather the fact that today curating is an established practice in the field of translation and mediation of artistic and intellectual production. It takes part in disclosing visions, which in turn have the potential to contribute to broadening our understanding of complex geographies and narratives.

CURA, RAW Académie Session 6, is the result of RAW Material Company’s collaborative reflection after five sessions of this programme. It is a session dedicated to curatorial practice as a contemporary cultural currency, and as social and political agency. Curating as a way to write and re-write histories, a way to read the present and imagine all possible futures. A method to change the meaning of things, and thus our readings thereof. Curating as a tool to occupy spaces and to interact with works of art. Curating as a model to be, to live, and to think with and through art and artists, in proximity to them and what they make, from their studios to the exhibition formats of their choice.

RAW Material Company is a nucleus, inhabited and animated by the spirit of a team of curators, where curating is both our work and at work. Inspired by and responsive to the creativity of its environment in Dakar, Senegal, RAW is Pan-African, with an ear cocked and a hand extended to the rest of the planet. It is a trans-disciplinary site for the thinking and practice of art. While the exhibition as a form is at the heart of our work, we do not consider it the only format for engaging with art. We are interested in the porosity of forms of mediation. Many have argued that the history of art is no longer a history of objects but of exhibitions, but for an institution such as RAW whose praxis deals with knowledge in its diversity of forms, the history of art we initiate embraces the multiple possibilities that are coming into being for curating ideas and the shapes of their materialization. We look from the visual arts to the sonic, sartorial and edible and are inspired by the arts of hospitality, movement and social performance. We turn a critical eye to the practice of pedagogy itself and think always about how these forms can ignite the political imaginary. We are curious about the before of before, the while of while and the after of after.

RAW is in addition the workplace for 20 fellows and an ever-increasing number of Académie faculty for a total of six months every year. We continuously question our proposals and curatorial ideas as we are constantly exposed to the invaluable input and knowledge of the professionals who work with us and enter our universe. The space of RAW, and its team, become placeholders and interlocutors for methods that challenge the way we approach curating. What does it mean for an institution to enact such suppleness? And to what extent is the Académie programme a curatorial project by RAW, or an opportunity for RAW to be curated? Several decades after the establishment of institutional critique in the artistic sphere, the ways in which institution building is itself a form of curatorial practice still constitutes an oft-overlooked field of enquiry.

Session 6, CURA, will offer a much-needed platform for delving into these questions and more, offering the opportunity to discuss and experience the institutional proposal that is RAW Material Company and its collaborators. We will explore the conundrums that feed our profession in contexts as specific and diverse as the environments they arise from. Such complexities include conveying the most recent critical thinking and aesthetic theory produced in the field of curating, invoking its historiography and the possibility of a decolonial curating. We will go further—what of resisting curating as a path that emerged from a theoretical framework predominantly shaped by the West, or reflecting on the impact of male dominance and misogynistic transgressions in a professional field defined, amongst other paradigms, by hierarchies of gender and race.

And lest we forget the interdependency that exists amongst curators and artists, critics and art historians, and the increasing crossover between these disciplines, CURA will welcome fellows from across the arts, focusing on practice over title and in the process asking necessary questions about the nature of collaboration.

The session will play out as a curatorial summit of a different order. Curators who have nourished and sustained a critical tension with regards to the craft and created unique perspectives and universes will form the body of the faculty. These are individuals and collectives who at once inform and challenge the work of RAW Material Company, and expand the possibility of transforming cura from noun to verb.

RAW Material Company is a center for art, knowledge and society. It is an initiative involved with curatorial practice, artistic education, residencies, knowledge production and the archiving of theory and criticism on art. It works to foster appreciation for and growth of artistic and intellectual creativity in Africa. The programme is trans-disciplinary and is equally informed by literature, film, architecture, politics, fashion, cuisine and diaspora.

RAW Académie is a tuition free experimental study programme. Ideal fellows are newly graduates from art schools, curatorial programmes and various fields of the humanities. The application process is online only. A maximum of 10 fellows are selected for each session. The application process for Session 6 opens on November 5, 2018 and closes on December 16, 2018. Only the first 75 applications will be considered for review.

Only shortlisted applicants will be notified and invited for online interview. Please apply here.