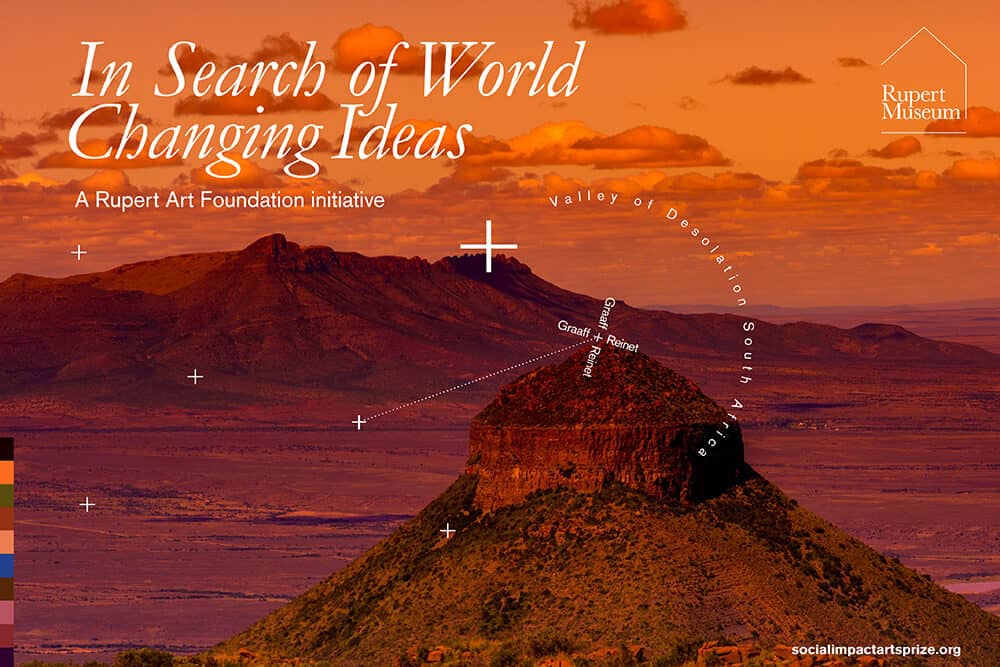 The Social Impact Arts Prize is a new art prize with a focus on social impact that has a direct, measurable effect on individuals and communities, as a result of an arts-based activity, project or programme. The awarded entry or entries will be transformed into reality through an ongoing Arts Residency in the town of Graaff-Reinet, South Africa, in 2020.

While the award focuses on specific categories in South Africa where social impact can be both qualitatively and quantitatively, measured including Education, Employment, Community, Environment, Technology and Direct Arts, we would like to take you back a few hundred thousand, or rather, a few million years, when the Karoo was still underwater and an inland sea!

That was the time when the world’s richest cradle of prehistoric fossil deposits, the Karoo, was formed. The Karoo holds not only an essential part of the history of the world, but the environment also inspired the earliest inhabitants, the first people of the Karoo, our earliest artists, the Khoi San.

The Khoi San was also the first fossil hunters. Among the most remarkable records of legendary dinosaur footprints and bones, are the Khoi San cave paintings. For these insightful and perceptive Palaeolithic artists, cave drawing was a significant means of communication throughout their prehistoric past. They documented the world around them, they sketched out the rituals that created a rich visual imaginary of a sense of time, of mythology and a rich oral history of storytelling. These artists constructed the world through a complex shared communal interdisciplinary arts practice.

The world around them, the site-specificity of the Karoo, was their frame of reference, their inspiration, where the precariousness of survival, of living, became synonymous with expressing their cultural imaginary and communicating through art. That was their Museum without Walls. They certainly never set foot in a museum!

Inspired by this rich visual history, we asked ourselves, how do we as artists reflect, interpret, and create our world today?

How do we as artists, as architects, as writers, as designers and creative thinkers, environmentalists, astronomers and scientists, engage collectively in our world, today?

And how do we do that for the greater good? How can we do that outside of the powerful commercial drivers of the art market and the art world?

How do we, through our arts endeavours, create the world in which we want to live?

The Social Impact arts prize is perhaps a small gesture towards this conversation. It’s not the be-all, the end-all, the solution to all the troubles in the world, or any ideological dream, but a realistic, site-specific, and a passionate framework, which we are putting forward, proposing and inviting you to dream big, to think differently, to think creatively, and be awarded by the Social Impact Arts Prize.

We are inviting artists, architects and engineers, landscapers, environmentalists, creative visionaries and other experienced community-based creatives to submit impactful, creative and meaningful ideas and concepts for the award’s consideration.

The closing date for all entries is 15 December 2019. First-round judging will commence from 16 December while the final round of judging, and the announcement of the awarded project or projects, will take place in the first week of March 2020 at an exhibition of the finalists at the Rupert Museum in Stellenbosch.